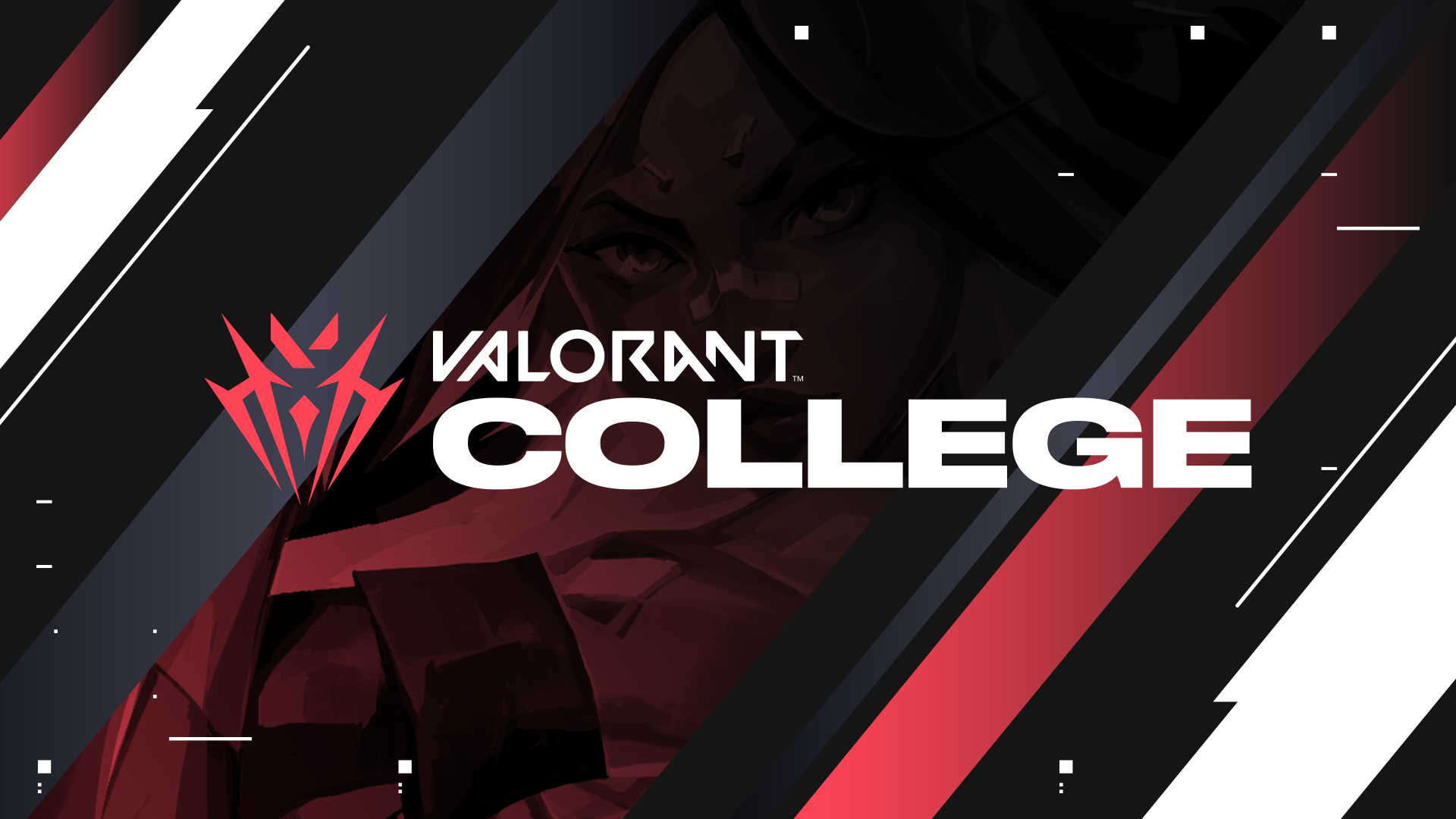 College VALORANT officially arrives in North America this school year! Our season launch announcement has a lot of information about why we’re here and our longer-term goals for the season, but we’re going to talk about how it’s all going to come together here. 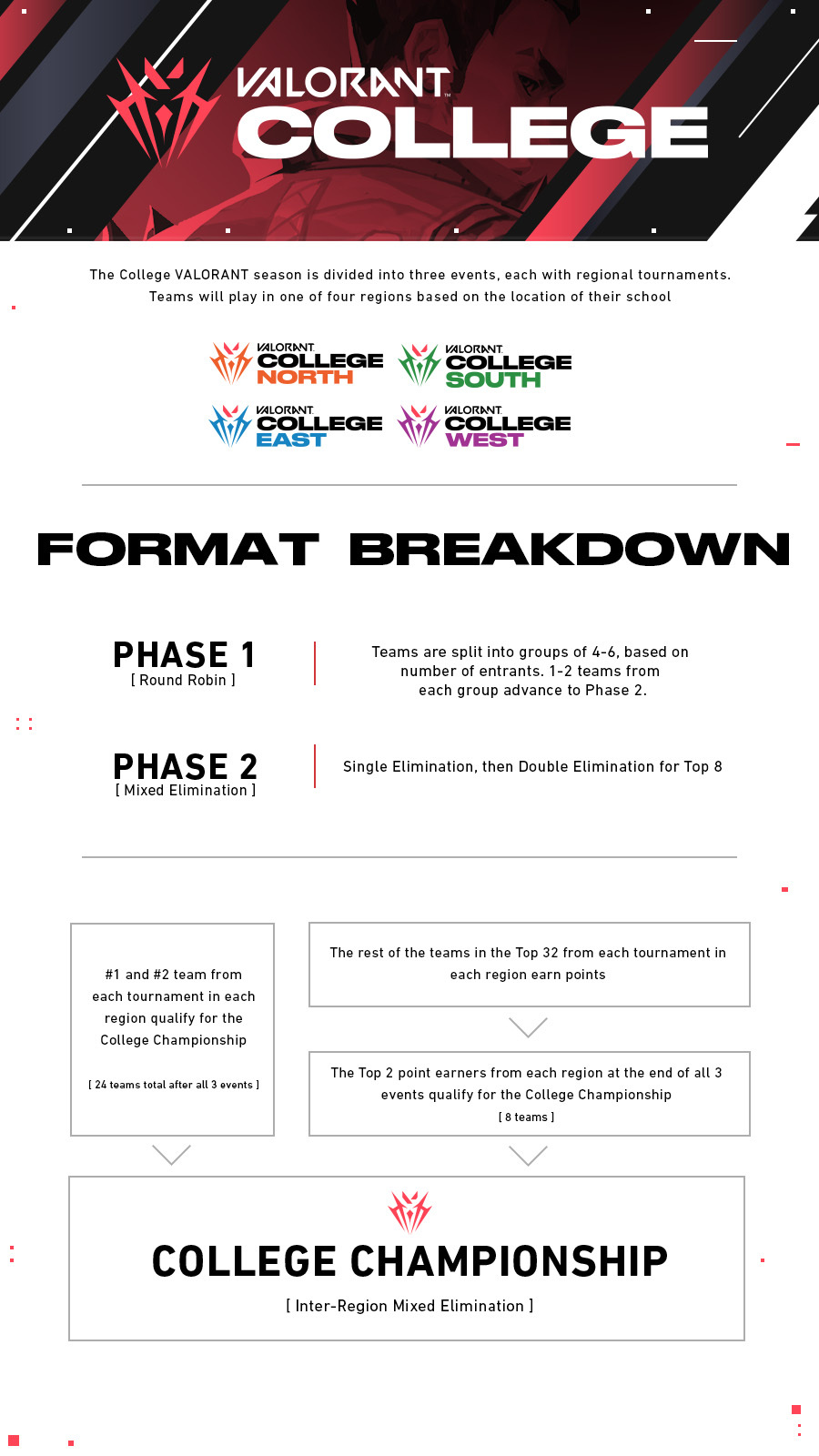 For the inaugural season of College VALORANT, players, staff, faculty, and fans will navigate to our central CVAL web hub, which will launch before matches begin. The hub will have match schedules, standings, and results from all current and past competition, plus links to each region’s tournament for registration and more details.

We will be launching a CVAL Discord server, similar to the CLOL Discord, which will serve as the main point of contact with season administrators, RSAA officials, and all news and updates for every participant. The Discord will go live when registration opens up, and will be the best place for participants to keep up with news and info.

Each region will be run by a separate tournament organizer, who will oversee all three tournaments for that region across the 2022-23 school year. They’ll all share the CVAL Discord, but participants will onboard on the respective platform for their region at the start of the season. Players will keep their account on that platform for the duration of the season.

In order to participate in College VALORANT, players must be currently enrolled in a degree program lasting at least two years and in good academic standing at the school they are competing for as either a full-time student (or a formerly full-time student who is about to graduate). All teams will be required to fill out an eligibility attestation form, which can be quickly completed by the team manager and signed by the school registrar’s office, to affirm their eligibility upon registration.

Each team roster can have between five and ten players, with teams able to start any of their players for any match and substitute freely between games. New players cannot be added to the roster after tournament registration ends, but teams can make roster changes between tournaments. Players may only play for one school per season and one team per tournament, but are allowed to switch teams between tournaments.

Teams must preserve at least 3 players from their previous roster in order to keep their points for Championship qualification (see below).

Each regional competition is based on VALORANT game servers and their local time zones. Teams may only enter one region per tournament, and are expected to enter the server that has the best connection and most relevant time zone to their physical location. Teams may agree to play individual matches on a different game server, subject to some limitations.

Teams may choose to change regions between tournaments, but doing so will forfeit all Championship Points earned from previous tournaments. Season Officials may block teams from switching regions to prevent situations where teams are seeking a competitive advantage other than better ping (no jumping regions to avoid good opponents!).

Teams that auto-qualify for the Championship may continue entering tournaments. If any auto-qualified team takes top 2 in a future tournament, the spot will drop to the next highest team that has yet to auto-qualify.

The top eight teams at each tournament and the top sixteen Championship teams will earn scholarship prizing. Prizes are distributed per team, with teams being allowed to share the scholarship across all relevant players, subs, and student staff members. All scholarship recipients must meet all season eligibility requirements, including attending the school that they are representing. Scholarships will be distributed after the conclusion of the College Championship.

Teams will register with the tournament provider responsible for their region. The Season hub has direct links to each registration page for each tournament while registration is open. You’ll need to provide info for at least five players, your school name, a team name and logo, and a few eligibility forms to get your team squared away

Teams will play two matches per week during tournaments, scheduled for Saturday and Sunday afternoons. Teams may reschedule their Phase 1 matches to any date during the phase. Limited rescheduling will be available for Saturday matches of Phase 2.